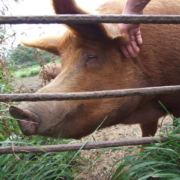 Increasing carbon content in agricultural soil has a large potential to provide negative emissions against the climate crisis. However, the uncertainty is much larger than from direct emission reductions like replacing coal fired by solar power. There are different ways how this uncertainty needs to be taken into account when the removal of CO₂ is certified. Pragmatic estimates by soil modelling as well as clever soil organic carbon measurements will be useful. A very important lever for assuring the significance of soil carbon sinks is to reduce the original emissions from the current farm by reducing livestock intensity. Hence at least 10% of the credits from soil carbon certificates need to be invested into compensation for reduced animal numbers on the farm. With this basic rule applied in Klimabuur projects, the credibility of soil carbon sinks is backed up with a very significant and fundamental improvement of the agricultural system. Besides reducing greenhouse gas emissions from livestock, animal welfare and biodiversity is increased while nutrient losses to air and water is decreased. It will in the end provide space for increasing tree numbers and sequestring even more carbon by agroforestry.